Ubuntu LTSP - how the other half live? 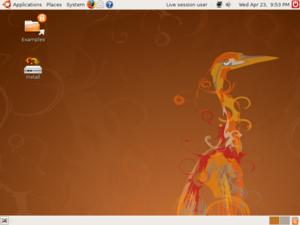 Having a brand new HP ML115 Server which I bought new for £107, I decided to have a play with Ubuntu LTSP at home. Actually I decided on Edubuntu, as I wanted to investigate the thin client management which I believe are included.

I downloaded the Ubuntu Alternate CD and burned it to disk. I booted the server onto the CD, missed the fact that I needed to hit F4 Modes and select LTSP before selecting install, whereon I wasted an hour installing Ubuntu-ordinaire.

Second attempt was pretty straightforward, but, only having a single network card, it warned me to edit /etc/ltsp/dhcpd.conf. Booted into Ubuntu without a problem and opened my router’s web interface and cribbed the DHCP settings and DNS settings into /etc/ltsp/dhcpd.conf. Switched off the DHCP on my router. Set-up the server static IP address via the Gnome network manager. Restarted DHCP with /etc/init.d/dhcp3-server restart.

Tested a client and got the “workstation not authorized”.

Ran sudo ltsp-update-sshkeys and sudo ltsp-update-image, rebooted the client and it worked beautifully, by which I mean that the laptop’s full 1600x1200 resolution was detected, and sound kicked in immediately.

So, even with the false starts, I managed to install a working Ubuntu LTSP server with all the bells and whistles in two and a half hours. And I could have done it at least an hour quicker than that. I know Ubuntu come in for some criticism, but that really is impressive usability. To be fair, I was helped by having knowledge of LTSP, DHCP, and Debian, but supposedly a second network card would have enabled the whole kit-and-kaboodle to work out of the box.

Tomorrow I will have a crack at installing the Edubuntu-Desktop!