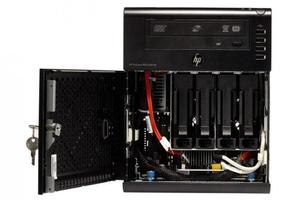 When the server arrived, I was surprised to find it had RAID built into it, but my understanding is that this is FakeRAID and thus should be avoided at all costs.  If you were particularly interested in that  option, with particular reference to Windows Home Server (yikes) then this page may be helpful.

I plugged in my wonderful IODD ISO drive and selected Debian Squeeze AMD64 netinstall, and off I went.  When it came to the partitioning, you need to carry this out manually, in the following order:

I found this howto on LVM + RAID for debian-installer most useful but, providing you follow the logical progression, it really is not as difficult as it seems.

After the partitioning, I continued with the installation, removing all options including “Standard System” from the software profiles; so that I basically installed a base system, which is how I prefer it.

Next I installed: sudo, GNU Screen, openssh-server, vim, fcheck, locales, localepurge, apt-file,  apt-show-versions and nullmailer (ssmtp is  better if your mailserver requires secure authentication).  Doubtless you have your own favourite packages to install!

Next step will be to configure as a small openvz server, and migrate the virtual machines off my old server (which I will be commissioning as a storage server).