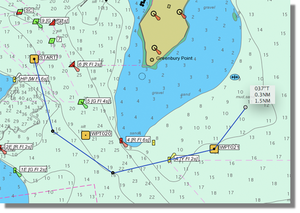 Following an earlier post on using GPS under Ubuntu, I have been trying to get PolarNavy working under Ubuntu 12.10. Polar Navy is the only Linux chart navigation software available for Linux. I know people will correct me by quoting OpenCPN, but there are no charts currently legally available for the UK, at least that I could find.

Polar Navy has two components - PolarCOM which communicates with the GPS receiver, and PolarView which displays the actual charts. The two applications can connect together, to show the vessel’s current position.

I had Polar Navy working fine under Ubuntu 12.04 i386, but for some reason I had problems running under Ubuntu 12.10 amd64. The problem was that PolarCOM would simply not display the position, i.e. the Lat and Long. I tried running from the command line, and there were a large number of errors when running PolarCOM, for example:\

I eventually fixed that by adding the following to the /opt/polarcom/bin/PolarCOM script:

Sadly PolarCOM was still not working. The GPS Receiver that I use is the BU-353, a terrific piece of hardware that “just works” under Linux. This is the recommended GPS for Polar Navy, which was a happy coincidence. When I plugged in the receiver it was detected as /dev/ttyUSB0, which I noticed had a group “dialout”. I added myself to that group:

I posted a request for help on the Polar Navy forums and they suggested I connect directly to the receiver using screen. I was unsure how to terminate that session, but ended up killing the screen session (Ctrl+Alt+a followed by k to kill). There is probably a better way - feel free to comment below.:

But doing so just output a load of binary garbage, which I realised (with help from Surrey LUG IRC #surrey on irc.lug.org.uk) meant that the receiver was no longer in NMEA mode. Apparently GPSD automatically reconfigures the receiver to SIRC III binary. I have no idea why this was not a problem in Ubuntu 12.04.

To fix this problem I needed to ensure that GPSD was not running. Unfortunately stopping the service does not seem to terminate the process, so I also had to kill it off:

Next I placed the GPS receiver into NMEA ASCII mode, instead of SIRCIII Binary mode:

Lastly, you may also need to configure the serial port, although I did not need to do this:

A quick check to see that we are getting ASCII NMEA sentences, showed that it was working perfectly, with easy to read text output from the receiver.

To prevent GPSD from reconfiguring the receiver again, I then needed to reconfigure it to use read-only mode:

And at the point where it requests switches, I added “-b” (Broken Device Safety Mode), otherwise known as read-only mode.

With trepidation I launched PolarCOM, which immediately showed my current position.