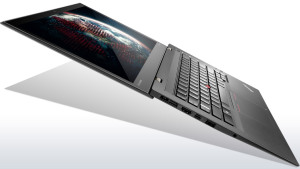 Following the demise of my Novatech n1410, I have now taken delivery of a shiny (actually “shiny” is one thing it isn’t!) new Lenovo ThinkPad X1 Carbon Gen 3. This is not a review of the X1 Carbon - there are plenty of those available already, but merely my experience of the first few days of ownership.

So why did I choose the X1 Carbon?

The high cost was a concern to me, but having paid £479 for the Novatech and it having only lasted 32 months, I was very conscious that price isn’t everything. I bought the X1 Carbon from BT Business Direct for a touch under £1,000.

When it arrived I was very surprised by the size of the packaging - this was a very small box for something so expensive! The one thing that I was not expecting was to be excited by the looks of this laptop - the words “business-like” best summed up my expectations. In the flesh I found the X1 Carbon absolutely stunning - the photo above is one of the few that I have found that do it justice.

By this point I was as happy as a Frenchman who’s invented self-removing trousers.

I downloaded Ubuntu 14.04-3 LTS 64-bit and copied it to my iodd 2531 Black USB 3.0 External Hard Drive Enclosure Virtual DVD Blu-ray ROM. The Ubuntu installation was flawless and fast. I opted for a whole drive encrypted LVM install and in no time was booting into Ubuntu. The screen was absolutely beautiful - for the first time I had a laptop with a screen to rival an Apple Macbook. 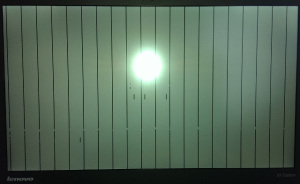 Ubuntu prompted me to run software update (I never update during the install process), which I duly did. Having rebooted - disaster struck - the boot process almost immediately dumped me to this screen. I was able to enter my drive encryption password blind and it then progressed to the beautiful LightDM login screen as before.

I logged this as a bug with Ubuntu and then installed an Ubuntu Mainline kernel and, whilst it still exhibited the screen corruption, it included a new Drive Encryption Password Prompt which did not suffer from the problem and gave me a functioning system once again (but read on for more).

I then noticed that the trackpad buttons were not working. Well that’s not entirely true - they were scrolling up and down a page, rather than behaving as normal trackpad buttons. This Ubuntu Question suggested that I was not alone and offered a solution - that of changing the trackpad from synaptic to imps driver. I tried this, but instantly the Trackpad felt less responsive, the cursor slowed down and whatever I tried to customise it made no odds.

After much head scratching and trial and error I found that by rebooting into the original 3.19.0-25 kernel, holding the Shift key down to access Grub during boot process, not only fixed the Trackpad issue, but it also resolved the screen corruption issues during the boot process.

As a result, I decided to uninstall the newer Kernel 3.19.0-30, which contains the problem, along with the mainline kernel and generic LTS kernel packages. This will prevent any further updates to the Kernel and is clearly only a short-term fix, but the benefit is a perfectly working system.

It is possibly worth reviewing that Ubuntu Question again and the issues raised therein:

In short, at least for the 3.19.0-25 kernel, this is a fully functioning Ubuntu laptop!

I was expecting problems with Fingerprint recognition, but that was not the case. I simply installed a couple of packages, scanned my fingerprints and it all worked fine.

There were two surprises: The first was that the fingerprint reader works for command line use - so no more typing the sudo password - simply swipe your finger! The second surprise was that it doesn’t appear to work for the initial LightDM login. The fingerprint scanner flashes a couple of times and then stops. Given that you only type this once in a session, this isn’t a huge deal, compared to the number of times you enter passwords for sudo and the lock screen.

There are reports of LightDM not working with encrypted home directories, but I am using whole Drive Encryption which I wouldn’t have thought would have been affected in this way, given that I have already entered my drive encryption password by this point.

If I manage to solve this problem I will of course update this page. If you have any solutions please do comment below.

Lastly, an oddity of the BT Business Direct specification is that this laptop has a 4G WLAN slot. This was not something I particularly wanted, but of course now that I have it I have had to order a £6.25 per month Vodafone 4G Data Plan. Once the SIM card arrives I will provide feedback.

It is easy to be critical of some of the pitfalls in running Ubuntu on the X1 Carbon, but the reality, with a few caveats, is that it works flawlessly. The laptop is a joy to use, the keyboard feels wonderful and running your fingers across the trackpad is an almost sensuous experience - I may be getting carried away here, but suffice to say that this is a very good laptop and it is working beautifully on Ubuntu with the kernel 3.19.0-25.

With luck the bugs will be resolved and I will be able to update the kernel in due course!