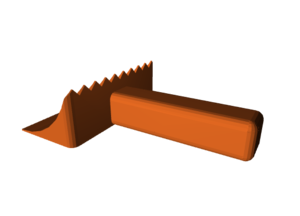 I was scraping the ice off my car yesterday and thought to myself that an ice-scraper was just the sort of thing that you ought to be able to print using a 3D printer. Surprisingly though, I could not find a single ice-scraper on Thingiverse.

This situation could not be allowed to continue a moment longer! 10 minutes later I had modelled a basic ice-scraper using OpenSCAD; although it was certainly no beauty.

60 minutes later and I had installed the MCAD library and was using “boxes.scad” to make the ice-scraper a little more rounded.

The resulting ice-scraper will certainly not win any design awards, but it was a fun project and I now know about the MCAD library, which will open a whole new world of functionality for me.

But the exciting thing for me is that a simple object like an ice-scraper can be designed in only a few minutes and, with a 3D printer, would be a reality only a short time later.