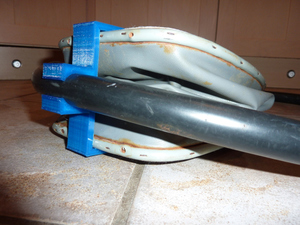 Having bought an inflatable Avon Redcrest dinghy on eBay, I found that the pump no longer had a clip holding the two halves together. I knew that the older models used to have a piece of leather attached to one half with holes that clipped over screws on the other half, but on this pump only the screws remained.

Newer pumps instead came with a plastic clip that attached to the pump hose and clamped the two halves together and I felt that it would be quite simple to replicate and so it proved. This was a simple design exercise and worked perfectly first time. I have since re-sold the dinghy and hope that the pump clip is still serving its new owner.