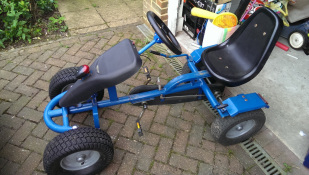 At a dinner party a few months ago, the host asked if I could repair their go-kart, using my RepRap 3D Printer. Apparently the steering wheel had broken off and the Chinese supplier refused to supply only the steering wheel. I accepted the challenge, but did warn that PLA was not the ideal plastic for such a repair, being somewhat brittle.

Having designed the part, I posted it to Google+ for advice. Wildseyed Cabrer suggested that I do away with the buttresses of v1 and instead design a solid cylinder. Of particular interest was his suggestion to use pinholes around the nut hole, to force the slicing program to add reinforcement. Andreas Thorn reminded me to use the $fn = 6 for the chamfering of the nut hole, as I had for the nut hole itself. The Google+ 3D printing community really is amazing - thank you.

Unfortunately printing the item was much delayed by the fact that I did not have the precise measurements. As always I had designed the item to be fully parametric; so that the exact measurements didn’t matter until I came to print. Unfortunately the owners of the go-kart did not feel able to accurately take the measurement; so instead the go-kart had to be delivered to our house.

Having measured and printed the final part, I was delighted that it all worked first time. The only issue was that it was very difficult to turn the wheel and I was concerned that the part would not indeed be strong enough. I noticed that all four tyres were completely flat, so much so that the tyre profile was concave rather than convex. This was clearly putting a huge strain on the steering and may well have been a contributory factor in the original breakage. Having pumped up all the tyres the steering was very much easier.

The repair complete, the go-kart was delivered back to the owners. I have no idea whether the repair will last long enough to be worthwhile, but providing it lasts a reasonable time, it can of course be simply reprinted. We could also consider having it professionally printed in a stronger plastic.